Announcements of new southern yellow pine sawmills to be built hardly register on the Richter scale anymore. That’s because such announcements from numerous companies during the past decade have, amazingly, become commonplace. 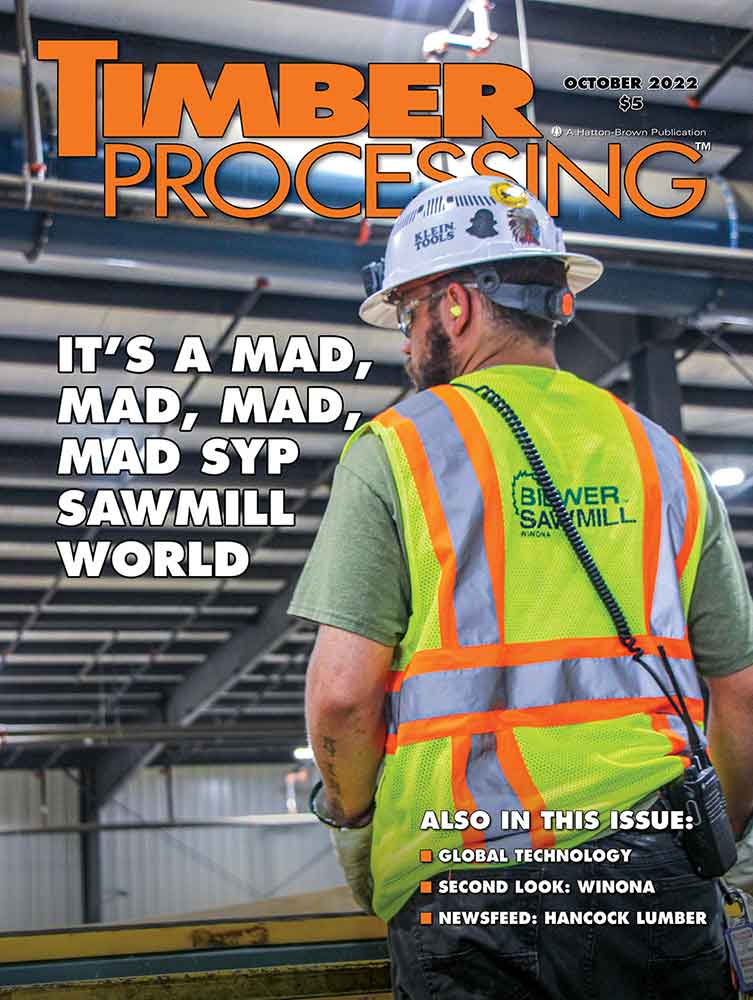 THE ISSUES: There's Magic In The Air

One of the first things a lot of folks ask me is how I got my job. I feel like it is a fair question, given that I grew up in metro Atlanta to a dad from Philly and mom from sunny SoCal. We had like maybe five trees in our yard growing up. My parents had never heard of “Mt. Gilead, NC.”

Our cover story in the August issue was Biewer Lumber’s new southern yellow pine sawmill at Winona, Mississippi. It marked Biewer’s second new SYP sawmill in the Magnolia State in recent years, with the first one at Newton, which was the one that began a remarkable turnkey trend in the Southeast.

Announcements of new southern yellow pine sawmills to be built hardly register on the Richter scale anymore. That’s because such announcements from numerous companies during the past decade have, amazingly, become commonplace.

Did you hear that Canfor plans to build s SYP sawmill north of Mobile, Alabama? Yawn!

Or that Claw Forestry has one in mind in Gloster, Mississippi? Ho-hum!

Or Teal Jones in Plain Dealing, Louisiana? Hunt Forest Products and Tolko in Taylor, Louisiana? Roseburg in Weldon, North Carolina? Canfor in DeRidder, Louisiana? Some of these are well into construction. Somebody get me a cup of coffee!

Not to mention the ones that started up this year, like Biewer at Winona, Mississippi and Idaho Forest Group in Lumberton, Mississippi. Or in recent years like Hunt Forest Products (LaSalle Lumber) in Urania, Louisiana, Angelina Forest Products in Lufkin, Texas, Rex Lumber in Troy, Alabama. Old news!

And there have been so many other large sawmill expansions announced for existing facilities. Nap time!

All kidding aside, when it finally dawned on somebody some years back that southern pine timberlands had a tremendous stock of sawlog trees, or sawlogs soon to be, thanks in part to the decline of pulpwood production, it was the dawning of a new day. Any company who completed one of these sawmills in time for the record lumber prices of the 2020s in tandem with a resurgence of new housing starts has reaped the rewards. And though the current pricing and housing situation has softened, and interest rates continue to get higher, the companies currently building a new one or expanding one may be wrapping up their projects about the time things turn for the better again, as demographics for potential new home buyers remains favorable.

Timber Processing recently interviewed a handful of sawmill owners and executives who have participated in these projects and invited them to reflect on the experience and where they’re going from here.

The general consensus usually points to Michigan-based Biewer Lumber’s greenfield startup in late 2016 in Newton, Mississippi as the beginning of the new era of SYP sawmill construction. President & CEO Tim Biewer joins this Q&A; as does Robert Jordan IV, president & CEO of the Jordan Family of Companies, which started up a new sawmill in Mt. Gilead, North Carolina in late 2017; and Fritz Mason, president and general manager of Georgia-Pacific Lumber, which started up three sawmills in a span of two years at Talladega, Alabama: Warrenton, Georgia; and Albany, Georgia; and Brian Luoma, president & CEO of The Westervelt Company and its greenfield sawmill that started up in Thomasville, Alabama in spring 2021; and William Van Devender, manager of Claw Forestry and its newly converted sawmill (Vicksburg Forest Products) at Vicksburg, Mississippi that hits its stride in the last quarter of 2021, followed by an announcement that Claw is building a new one in Gloster, Mississippi.