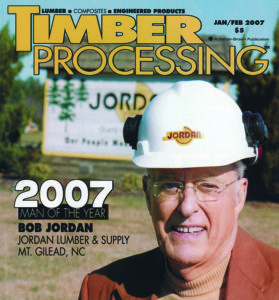 Robert Byrd (Bob) Jordan III, who led Jordan Lumber & Supply Inc. to become one of the most progressive sawmill operations and one of the largest lumber producers in North America, who was a 2007 Timber Processing Man of the Year, and who served as Lt. Gov. of North Carolina from 1984 to 1988, and as state senator from 1976 to 1984, died February 16 peacefully at home overlooking Lake Tillery in Mount Gilead, NC, surrounded by his loving family. He was 87.

Jordan served as CEO and President of Jordan Lumber & Supply, Inc. and its affiliates from the time he returned home from the armed services in 1956 as a Captain in the U.S. Army until being succeeded by his son, Robert IV, this year.

Under Bob Jordan’s leadership, Jordan Lumber & Supply’s business imprint on its local community and industry overall reads like an exemplary template of what every forest products company should strive to be: A growing, innovative business that views long-term viability and sustainability while providing good jobs and conserving raw materials as matters of principle.

The State of North Carolina flew its flags half-mast for three days upon Jordan’s death.

FOCUS ON THE FAMILY