Industry stakeholders of all types worked to supply materials for the recently opened ICCU Basketball Arena at the University of Idaho in Moscow. The 4,000 seat facility, which opened in October 2021, incorporates several innovative mass timber elements across some of the longest spans in the country. Designers and engineers were able to source many of the structural wood products and materials to make them—including cross-laminated timber (CLT), dowel-laminated timber (DLT), glulam, plywood, and cedar siding—from local suppliers and producers. 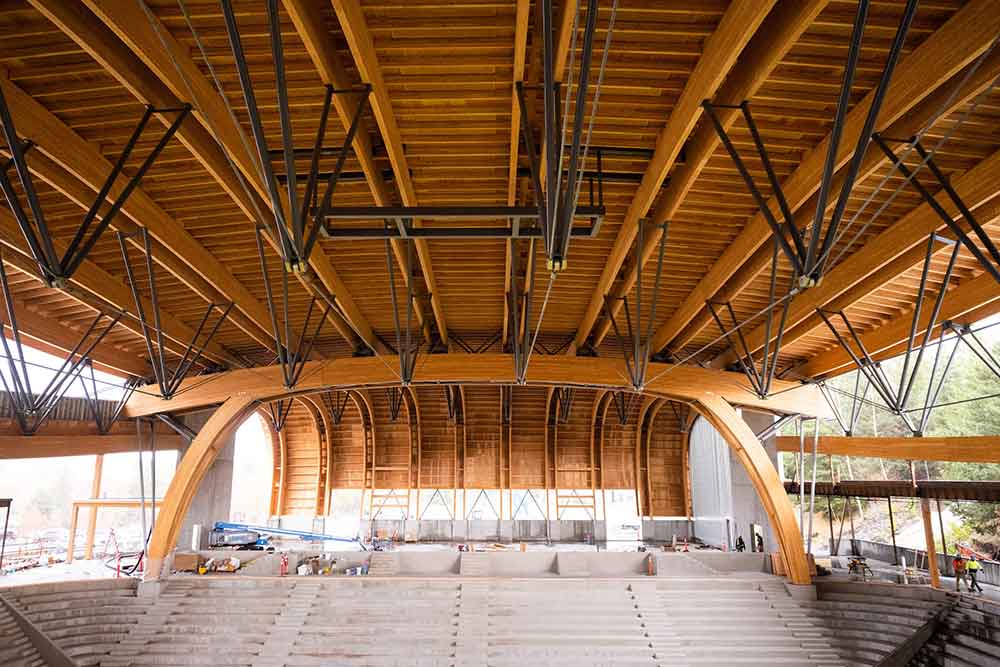 Some of the timber used was specifically harvested from the university’s experimental forest. Associated Loggers Council-Idaho board member Mark Swanson, of Swanson Logging in Lewiston, was on hand for the grand opening. Aaron Walter Logging, Frederickson Logging, Jack Buell Trucking and other contractors also participated in the effort.

The facility is noted for its use of EWPs in innovative ways, such as a plywood roof diaphragm that clear-spans 250 feet from end-to-end of the arena and acts as the lateral bracing system for both wind and seismic loads. A review in an architectural paper explains that the building incorporates “a hybrid structural system comprising glulam beams, steel king-post trusses, and concrete shear walls that rises to form a broad canopy over a cast-in-place concrete seating bowl, itself ensconced in a trim of zinc-and-glass curtain wall.”

Corvallis, Ore.-based Lucidyne Technologies, which was purchased in 2020 by Microtec, is now named Microtec Corvallis as Microtec finalizes its branding integration plans. Last year, following its acquisitions of Finscan and Woodeye, Microtec rebranded Finscan as Microtec Espoo and Woodeye as…

U.S. softwood lumbermen are not as bullish about their lumber business situation as they were a year ago, but they’re still upbeat and capital expenditure projects are in full force, according to Timber Processing’s annual 2022 U.S. Sawmill Operations & Capital Expenditures Survey…

U.S. single-family housing starts in April dipped 7.3% from March to a seasonally adjusted rate of 1.1 million, but multi-family starts (five units or more) shot up 16.8% over March to 612,000, according to the U.S. Census Bureau and U.S. Dept. of Housing and Urban Development monthly new…