To See The Future, First Look Back 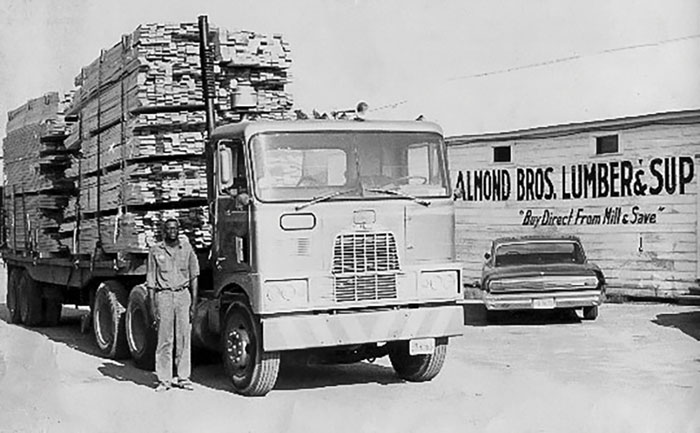 Over the last few years it seems there has been a flurry of new mill announcements, startups and upgrades with new ones popping up every few days. The downside to some of those announcements is the revelation that many independents are going the way of the dinosaur. However, despite all the shiny new equipment and large companies with multiple mills in multiple states, the industry still retains some history. You just have to look a little harder to find it these days.

Brand new SYP mills are populating the South, turning out more and more production each day. But this month’s featured mill, Almond Bros. Lumber in Louisiana, and the family members who own and operate it—William, Ardis, Will, Winn and Vince Almond—say the mill isn’t about its production numbers. And it isn’t all about the intrinsic history either. The staying power of this mill, continuously operating on the same site since 1947, having seen the worst of times following the Great Depression and the Great Recession, remains the commitment to tinker with equipment and to continually adapt a strategy to grow overseas markets.

Since the early 1990s, the bulk of Almond’s production has gone to more than 200 overseas companies in 20+ countries—high-grade SYP milled and sold by the fifth generation of Almond men to work at the mill site in Red River Parish Louisiana, with the fourth generation no less than a phone call away for guidance. The photos that line the front office of Almond Bros. Lumber show a hardworking and enterprising family from the Civil War and Reconstruction all the way to 2018. In a way, the story of the Almond family and its portable sawmill to now a large mill site, optimized with cutting edge scanning technology, tells a bit of the story of the sawmill industry itself.

But the Almond mill is not the standalone bastion of history in the lumber industry. This issue also brings the next installment of May Donnell’s reoccurring series Mill Roots: A face first dive into the rich histories of some of the country’s well-known sawmill families like F. H. Stoltze in Montana, Collum’s Lumber in South Carolina, Hancock Lumber in Maine and now, The Collins Companies in Oregon.

Yes, we’re always going to give some love to the newest, brightest and greatest mill announcements, startups and upgrades. But, in order to see the future, sometimes you have to look back.